Dewclaws are those odd thumb-like nails found partway up a dog’s inner forelegs. You have probably heard that they are useless and that dogs don’t need them and shouldn’t even have them. But how much do you really know about dewclaws? Are they really as useless as you think?

Dewclaws: Should we do ’em or should we lose ’em?

In recent years in the United States, dewclaw removal has been pushed and recommended, because dewclaws were believed to be a “useless, vestigial” part of a dog’s anatomy. An attitude has even been developed by some people in this country that good breeders remove dewclaws, but irresponsible breeders try to cut corners and don’t remove them to save some money.

I want to shake up that idea a little bit. There have been some veterinarians and doctors making observations about dewclaws and how dogs use them that have begun to reshape our opinions on whether or not they should be removed.

As a side note, did you know that it is illegal in the UK to dock tails, dock ears, and remove dewclaws? In the UK, these are viewed as painful, cosmetic procedures with little to no medical benefit. Tail docking and dewclaw removal are usually done to puppies at only a few days old without anesthesia.

So today, I’d like you to put aside any biases and previous opinions about dewclaws, and let’s take a look at the pros and cons of dewclaws. As with any medical procedure, there are always risks and benefits. It is up to you as a dog owner and me as a breeder to wisely weigh these risks and benefits and decide which option is best for a particular breed or a particular dog.

Let’s begin with some of the reasons that dewclaws are removed. Dewclaws are usually removed when puppies are just days old. It is done to prevent dewclaw injury as an adult. Sometimes, adults with dewclaws have a serious injury or repeated minor injuries involving a dewclaw that makes it necessary for it to be removed.

Here are three problems that dewclaws can create:

The first two problems are easily prevented by proper care. The third problem is unpredictable. Some dogs will go a lifetime without experiencing any injury, while some may be subject to repeated injury. I will touch later on what can make a certain dog or certain breed more prone to injury than others.

Now let’s look at what purpose dewclaws serve and the benefits of keeping them. Most of the quotes and information presented here come from the article “Do the Dew(claws)?” by Christine Zink DVM, PhD, DACVSMR. She has worked for many years with sporting dogs used in hunting, agility competitions, and other athletic events. (You can download the PDF and read her full article on dewclaws here.)

First off, let’s debunk that widely-believed myth that dogs don’t use their dewclaws. Take a look at these two pictures. 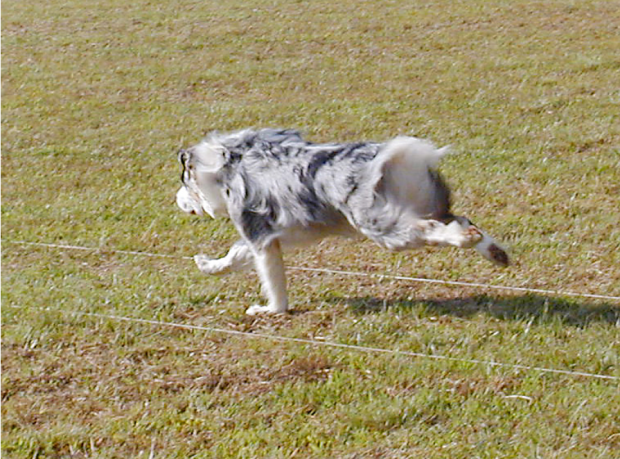 In these pictures, you can clearly see how much of a dog’s foot actually touches the ground. When running, a dog’s dewclaw does touch the ground, especially when navigating a turn like in these pictures. 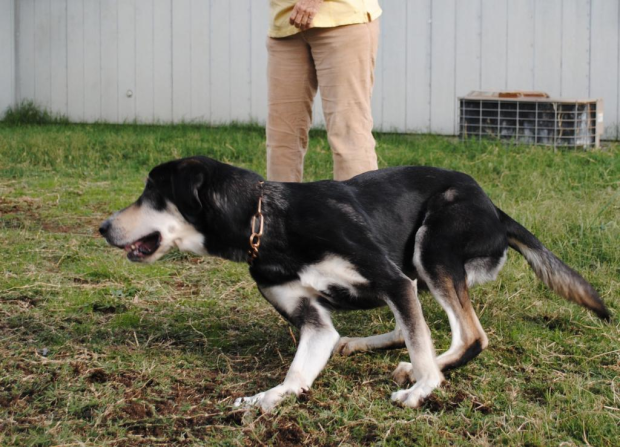 After a good romp, it’s not unusual to find grass or dirt on a dewclaw. This picture shows the points of a dog’s foot and leg that contact the ground when running. Notice the two distinct green patches- one at the dewclaw itself and one higher up on the leg at the pad.

Did you know some highly active dogs that spend a lot of time outdoors can wear down their dewclaws naturally?

This picture comes from Christine Zink’s article. It shows the anatomy of a dog’s foreleg. 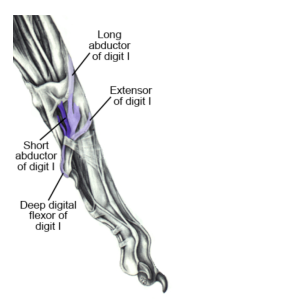 Zink says, “Those muscles indicate that the dewclaws have a function. That function is to prevent torque on the leg. Each time the foot lands on the ground, particularly when the dog is cantering or galloping, the dewclaw is in touch with the ground. If the dog then needs to turn, the dewclaw digs into the ground to support the lower leg and prevent torque. If the dog doesn’t have a dewclaw, the leg twists. A lifetime of that and the result can be carpal arthritis, or perhaps injuries to other joints such as the elbow, shoulder and toes. Remember: the dog is doing the activity regardless, and the pressures on the leg have to go somewhere.”

“I have seen many dogs now, especially field trial/hunt test and agility dogs, that have had chronic carpal arthritis, frequently so severe that they have to be retired or at least carefully managed for the rest of their careers. Of the over 30 dogs I have seen with carpal arthritis, only one has had dewclaws (emphasis added).”

Dogs also use dewclaws to grab and hold things, much like we do with our thumbs.

Here is a link for a fascinating video about how dogs can use their dewclaws.

The video shows waterfowl hunting dogs retrieving birds on partially frozen lakes. (Don’t panic about the dogs in the icy water. Remember, these dogs are bred and trained for it. The hunters with them know how to properly care for their hunting dogs.) The dogs use their dewclaws as ice picks when they are pulling themselves out of the water and onto the ice. You see them turn their legs outward, dig their dewclaws into the ice, and use them to pull themselves out of the water. The dogs without dewclaws have a much greater struggle getting out of the water, as their legs continually slip on the ice. They have nothing with which they can grip the ice.

I’m going to guess that most of the people reading this don’t have dogs that regularly swim in frozen lakes, but it’s very interesting to note the way God has designed dewclaws to function. Useless and vestigial? I think not.

I’m sure you have already assumed from the tone of my post so far, that we have made the decision not to remove our dogs’ dewclaws. Is this the right decision for everyone? Not necessarily. Here is why we have decided it is best for our dogs and puppies to retain their dewclaws.

We have an Irish Setter, a Golden Retriever, and a Mini Goldendoodle. The setter and retriever are both sporting breeds. We regularly have these dogs out in the field hunting or hiking. Even though a goldendoodle isn’t a pure sporting breed, she is still very active and does well in high energy activities like hiking and agility. Our dogs spend much of their time outside running and playing. They get a lot of exercise. When out in the woods hiking or hunting, they are going through thick underbrush, brambles, and high grasses. They navigate steep banks. When swimming, they are on slippery river banks.

Because of the lifestyle our dogs lead, I firmly believe that they need their dewclaws. They use them! With the high activity level, they put a lot of stress on their legs, and it’s best for them if their muscles and joints are able to function properly to prevent unnecessary strain. (I especially think of this with Goldens. Because this breed is already genetically prone to bone and joint problems, I want to avoid any unnecessary strain and torque on her joints!)

We have also decided it is in our puppies’ best interest if they retain their dewclaws. The great thing about dewclaws is this: if need be, they can always be removed later in life. If you don’t agree with our stance on dewclaws and would prefer to have your puppy’s dewclaws removed, it can easily be done later. Many people spay or neuter their pets, and it can be convenient to remove dewclaws during that procedure if you chose to.

I do believe, though, that there are times when it is necessary for dewclaws to be removed. Some breeds are known to have dewclaws that are very loosely attached. These dogs may be prone to repeatedly catching their dewclaws and tearing them. It’s very important to keep dewclaws trimmed short. Because they get less wear than other nails, they will need to be trimmed more frequently. Less active dogs will not wear down the dewclaws at all. Some breeds even have dewclaws on their rear legs. Often these rear claws are loosely attached and more prone to injury. Sometimes, sporting or working dogs will tear their dewclaws in the normal nature of their work, simply because they are using their dewclaws a lot. In some cases, if the injury is severe, the dewclaw may need to be removed. Most times, this is not the case; but it can happen. Although many dogs go a lifetime with no injury, these injuries are very painful if they do happen.

Conclusion: It is important for pet owners to be aware of the risks and benefits of dewclaws. Do your research. Know your dog. Understand that dewclaws serve an important purpose in a dog’s leg and movement, but also know the potential problems to watch out for and work to prevent. Every medical decision regarding your dog has risks and benefits, and the decision that is right for one dog may not be the decision that is best for another. Be a responsible owner, and educate yourself!

For this household, though, we have decided to “do the dew.” 🙂