You’d think some day I would say enough is enough. At some point surely I won’t have enough love and energy for any more furry friends.

Well, I haven’t reached that point yet.

We had been planning to get our own stud at some point, but we weren’t in a rush. We were more so leaning towards a mini poodle, since both Mia’s and Jade’s litters will be sired by a mini poodle. Yet, we also liked the idea of having a male setter. (Setters are such fun!) Then Timber kind of fell into our lap, and we couldn’t say no!

Timber comes from the Celtic Irish Setter line. It’s a bloodline I have been envious of since we got Duchess. This line is known for excellent field dogs, and they have also been used in therapy and agility. The Celtic setters are a great combination of gorgeous form, excellent hunting instincts, and jovial personality. We had inquired about using their studs for Duchess to bring some of their bloodline into our own setter puppies.

However, we were also checking around with some other people who have Irish Setters studs. And that brings us to Timber. His owner bought him from the Celtic breeder as a puppy. His owner also had another Irish Setter stud which fell more into the “show” line of setters rather than the “field” setters. (Show setters are larger with much longer hair. We prefer the field setter which are smaller, leaner, and have stronger hunting instincts.) Timber’s owner, however, liked the show setters, and rarely used Timber as a stud. He was actually considering selling Timber. This proved to be a great opportunity for us. This is the bloodline we like, and Timber is a full-grown, proven male. So we brought him home!

And let me tell you what an adventure that has been!

Timber has the sweetest, happiest personality. Nothing fazes him, frightens him, or upsets him. He assumes everything and everyone in the world is good.

See that happy, smiling face? That is Timber 100% of the time. You really can’t help but love him. The only unfortunate thing about him is a general lack of training. For anyone with a dog, especially a hunting breed, you can understand the difficulties that can come with an untrained, adult dog. The only command he knows is “sit.” We are working on teaching him “come,” but he’s so independent and energetic it’s difficult to catch and maintain his attention.

This problem is compounded by the fact that he is a real Houdini! It took us several weeks to modify his pen in order to keep him contained. In fact, we have had him nearly two months, and just this week he contrived a new method of escape. This has given rise to a new phrase around our house- “Timber-proof.” We are still Timber-proofing his pen!

I’m ready for the day we can just let this happy boy run! We have an underground fence on our property, and we love it. Our dogs can spend the whole day running and playing together as they please. All except poor Timber. He’s not totally trustworthy with the underground fence, and he doesn’t respond consistently to the command “come,” so he’s been a on a figuratively short leash. I always keep one eye on the yard when I am in the house to make sure Timber is still in his pen; and when I’m outside with him, I can’t let him out of sight. We’ve made a lot of progress, but he still has a ways to go until he can be given free range of the property.

Here is one more picture of this handsome guy.

And here are some recent pictures of our girls! Jade is getting prettier every day.

Not quite as recent of a picture, but Duchess is as goofy and energetic as usual! 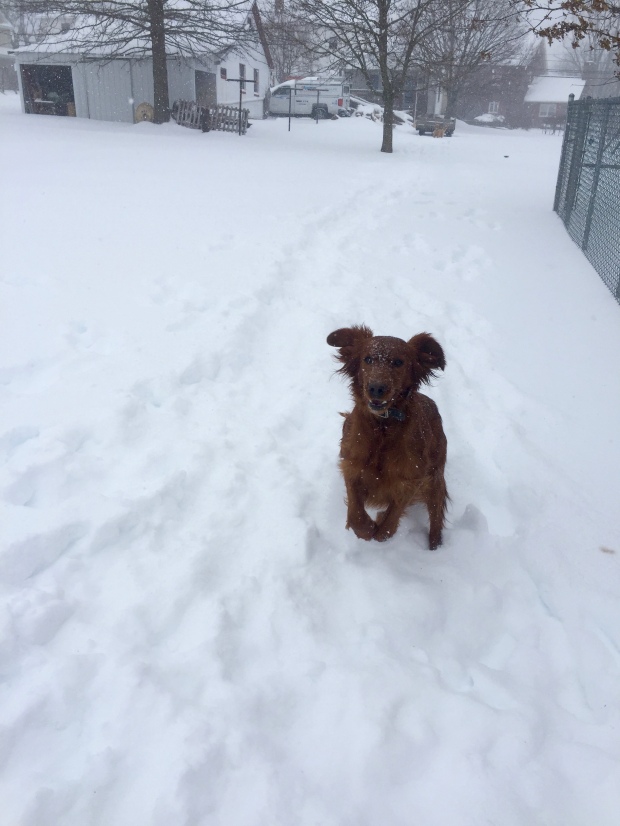 And sweet Mia is starting to get a little swelly belly with her puppies that are due in May, although it’s not noticeable yet in these pictures. She is still eager to play fetch, though, whenever someone is willing to throw her ball!

Have a great week!