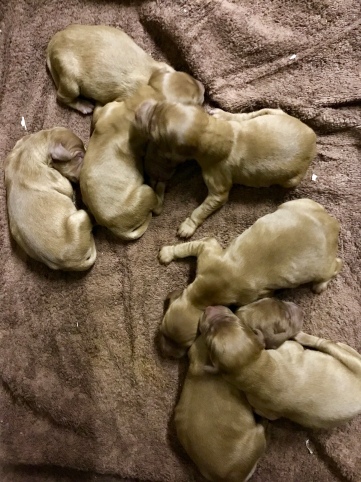 Duchess was very kind to me and decided to have her puppies during the day, which was GREAT! With another delivery under my belt, I gained a few new experiences. With each litter, I seem to pick up valuable nuggets of information and experience. Sometimes those nuggets come from good experiences and some not so good. Every litter is different and presents its own unique challenges.

So here’s how my day went.

Yesterday (Thursday), I charted a temperature drop for Duchess, so I knew we would see puppies sometime in the next 24 hours. I checked on her a few times during the night, but she was pretty calm and relaxed.

Morning came, and with it, some encouraging signs. As the morning progressed, Duchess became more and more restless. Pacing, panting, digging, nesting, and frequent bathroom trips.

Her first puppy was born shortly before 11am. She quickly and steadily birthed five more by 12:30. Then things paused for a bit, which isn’t unusual. I was fairly certain she wasn’t finished, though.

Around 1:00 she began pushing. Typically, I see her push for just a few minutes and then a sac presents. Once I see can see the puppy, it’s usually out within seconds. Duchess doesn’t waste time. However, this time, Duchess kept pushing for almost half an hour with no signs of a puppy. (Thirty minutes is the textbook time frame for delivering a puppy. After thirty minutes of pushing, it’s time to call your vet.) I had given her a few doses of liquid calcium in the last two hours, which helps for strong contractions; but she was still struggling. She started to get very agitated. She left her puppies and began pacing and whining.

I was getting very nervous. I called my sister, who breeds Miniature Schnauzers, because I knew she has had some similar experiences. While on the phone, I saw back feet. The puppy was no longer in it’s sack. Both of these things are normal. Puppies are frequently born back feet first, and it’s not unusual for the sack to break before a puppy is totally born. But when those two things are combined, you need to be watchful. If a puppy is breech with a broken sack, it may drown before it’s born. Those puppies should be delivered quickly.

But this puppy, for some reason, was stuck. Duchess kept pushing, but the puppy wouldn’t budge. So far in this entire delivery, I had not done anything except watch. But this little pup was stuck, and mama was clearly distressed. The puppy was out almost up to its hips. I grabbed the legs and gently pulled during the next couple contractions. And just like that, the pup was out.

But Duchess was too agitated to care for her, and she was more concerned about getting back to her other puppies. This little one wasn’t breathing, which wasn’t a surprise considering her prolonged birth. I spent the next few minutes vigorously rubbing her with a towel and suctioning her airways clear of fluid. She began moving almost right away, and soon started some weak gasps. After a couple minutes, she began squealing- LOUDLY. She wanted to let the world know that she did not appreciate her traumatic arrival. I was so happy to hear those angry squeals.

Would have this puppy died without my intervention? Maybe not, but my help certainly increased her odds of survival. Sometimes, healthy puppies are lost in whelping, because of small problems like this. Duchess almost certainly would have eventually gotten this puppy out by herself, but it may not have been soon enough for the puppy. That’s just how nature works sometimes. But, fortunately, I was able to lend nature a hand. With just a little bit of extra help, this little pup seems to be doing well.

Things quieted down after that, and Duchess has been contentedly caring for her babies since. 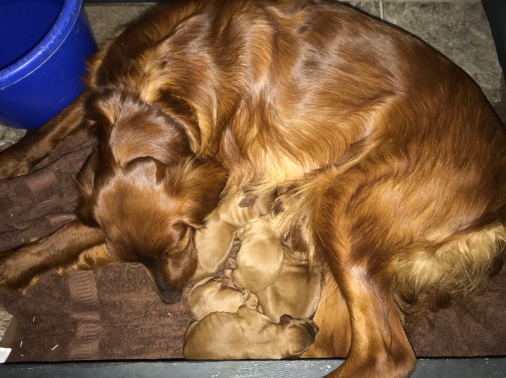 We did have one more little blip, though. Once Duchess was calm and settled after whelping, I began weighing and identifying each of the puppies. As I did that, I noticed one of them had a torn, bloody ear! 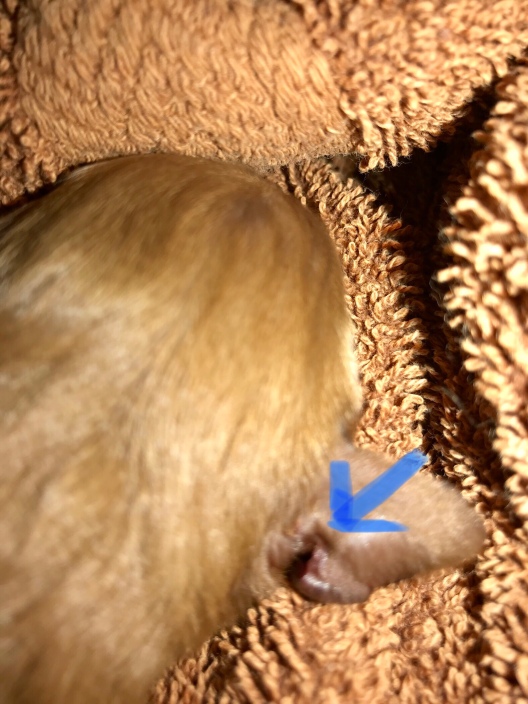 The picture isn’t very clear, but she had a deep tear at the base of her ear. It was bad enough, I was afraid it may tear off completely if I just let it go. (Birth is tough for these little guys!) So off to the vet we went for a couple of stitches and a little glue. I’m hoping Duchess doesn’t bother the stitches! As long as the stitches stay in, the ear should heal nicely. 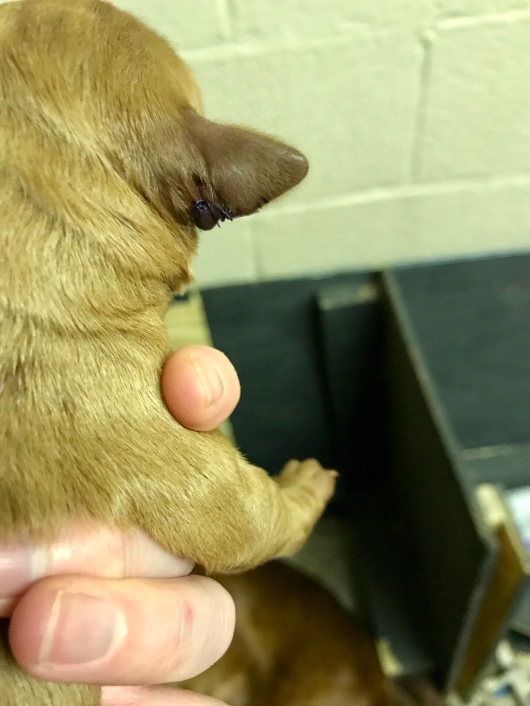 All in all, it was a good day, and we are praising God for our seven beautiful puppies! Have a good weekend, everyone! 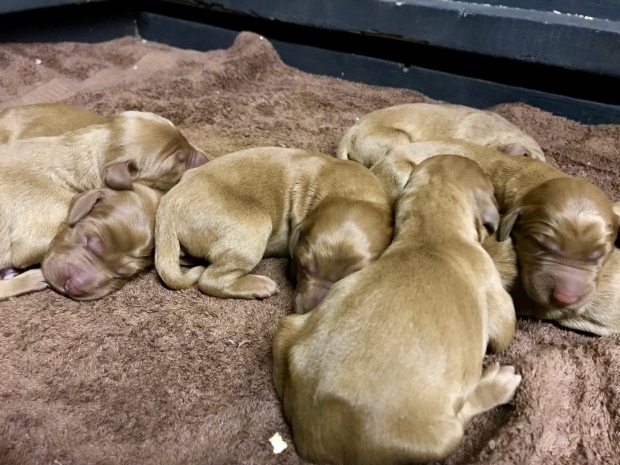 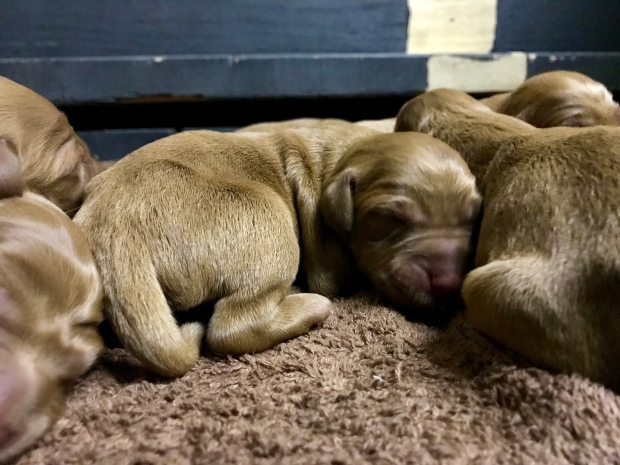 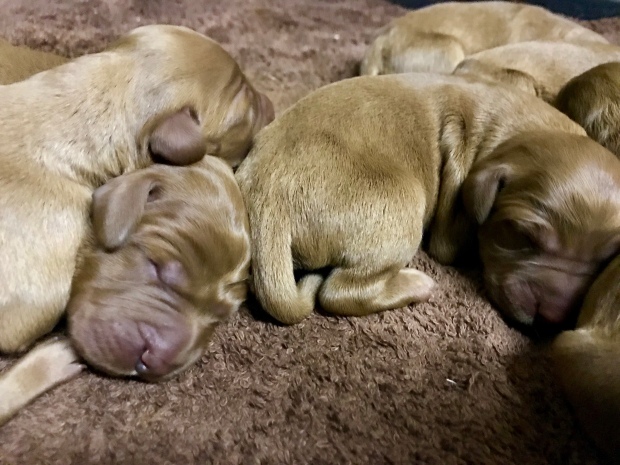